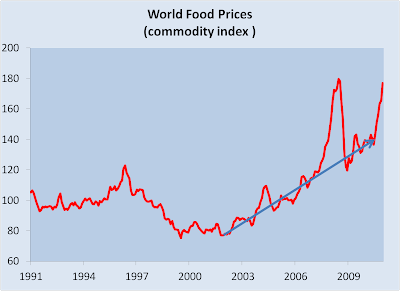 World food inflation is the crisis of the moment. Prices for basic commodities are rising across the world, causing enormous distress, particular for the poorest and most vulnerable.

There are several ideas running around the internet seeking to explain this appalling state of affairs. As I mentioned in previous posts, these explanations can be grouped into three broad categories;

There is a difficulty in adjudicating between these three explanations. All three are, to some extent, true. They are not mutually exclusive. Nevertheless, we need to arrive at a relative weighting. Which of these three factors is the real driver behind the devastating rise in food prices?

It helps to clarify how these explanations might show up in the data. The Asian growth story is about fundamentals. If it is true, it will turn up in the data as long run trend . Since Asia has been growing for at least a decade, this upward trend needs to be there from the early 2000s.

The supply shock story is about deviations around the trend in prices due to year-on-year climatic differences. It is also commodity specific. Different commodities are produced across the world under different conditions. One year, wheat supply is down, but banana supply is up. Read the next sentence carefully, because it is important. An aggregate food price index will smooth out commodity specific shocks. Supply shocks hardly show up in an aggregage index, and if they do, it is as comparatively small fluctuations around the trend, and only to the extent that climatic fluctations affect all commodities.

Now we can define a bubble - it is a temporary deviation from the long run trend. Prices shoot up, and then crash.

So, what do we see in the chart above? First, there has been a long run trend upwards in food prices. This trend started in 2003 and it is illustrated in the chart by the blue arrow. This, I venture to suggest, is the Asian demand story.

However, there are two undeniable massive deviations from this trend. The first occurred in 2008. Food prices shot up, jumping massively away from the trend and then came crashing down and returned to trend. Hands up, please. is there anyone out there who does not think that this was a bubble?

The second deviation is underway now. In terms of orders of magnitude, it is at least as dramatic as the 2008 bubble. Give it a year or so, and I reckon food prices will come crashing down, just like the 2008 bubble.

This is not an "either or" issue. World food prices have exhibited an upward trend for at least seven years. This is consistent with strong demand in Asia. Higher Asian demand can sit perfectly comfortably with a speculative surge generated by irresponsibly low interest rates.

However, neither Asian demand nor climatic fluctuations can not explain the two recent massive surges in food prices that occurred in 2008 and from June 2010 onwards. These are clearly deviations from long run trends; these are bubbles. To understand why food prices are now suffering from a speculative surge, one needs to understand how financial markets operate, especially when interest rates are abnormally low.

Email ThisBlogThis!Share to TwitterShare to FacebookShare to Pinterest
Labels: inflation